About the Roma Amor series: Novels of treachery, love, and honor set in Rome of the Caesars

How it all started.

Like many novelists, I started writing stories at age 11 or so. By the time they disappeared down the garbage chute of time, I was hooked on historical fiction. Rosemary Sutcliff and Mary Renault were early influences. Today I’d name C. J. Sansom, Ruth Downie, Andrew Taylor, Adrian Goldsworthy, Steven Pressfield, and S.W. Perry, among others.

My favorite stories—yours too, maybe?—incorporate suspense, intriguing circumstances, romantic tension, and a splash of humor, all wrapped around something important at stake. Coming from a military family, I confess to two particular influences as a writer:

1. My dad.
My father was a prisoner of war for three years before being liberated. Much later I learned (not from him) that he’d led resistance efforts among the other prisoners, refusing to betray his men despite being beaten and tortured. When I started writing the Roma Amor series, I wanted to explore how a self-centered son who had always defied his father might come to understand what was truly important.

2. The Romans.
“Ben Hur” is partly to blame. (The treachery! The sea battle! The chariot race!) The more I learned, the more I wanted to write about these determined, clear-sighted people.

In short, the Romans were like us in many ways, but without original sin, coffee, or disposable diapers.

What's so interesting about Caligula's reign?

Caligula was only 28 when he was assassinated, after ruling for just four years (37-41 AD). Who wouldn’t want to write about his short reign? Imagine it: The mightiest empire the world has yet known is in the hands of a young man who wants only to be loved.

In Roma Amor, Marcus Carinna risks his beliefs, his love for the defiant Germanic maiden Aurima, and even his life when his father obliges him to befriend Caligula, once his brother’s closest friend.

In Amber Road, Marcus braves the Germanic wilderness in search of his beloved Aurima, who had promised to help him overcome the disgrace of what happened in Rome—but Caligula’s secret police have other plans.

While soaking up info from history books and museums, I’ve walked on Roman roads, stood on the Palatine Hill where Caligula was murdered, and explored the Danube frontier from the site of the legion fortress of Carnuntum. Personal experiences like these make it easier to inhabit a character—and help readers see the world through his or her eyes.

Peek Behind the Scenes at My Writing Life 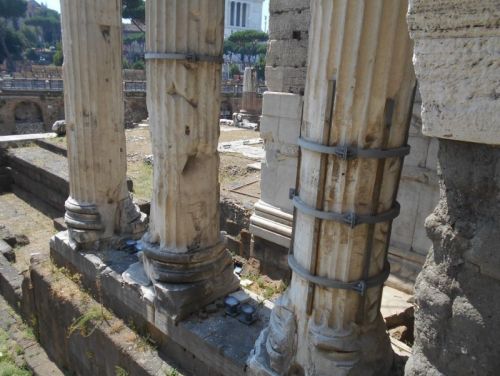 Every time I visit Rome, they’ve discovered something that brings us closer to the city of Caesars and Senators, soldiers, shopkeepers, and slaves. 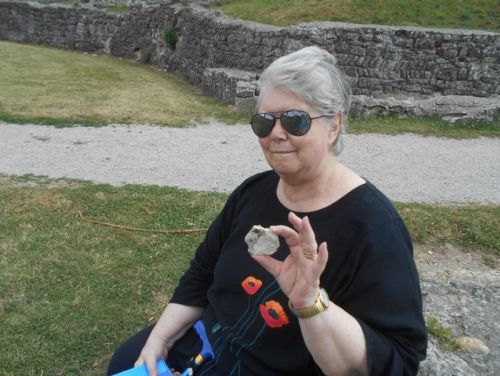 A soldier’s boot might have kicked this piece of stone, or a gladiator’s sword chipped it out of the arena wall. Just holding it transports me to the roaring crowd here in Carnuntum’s legion amphitheater. 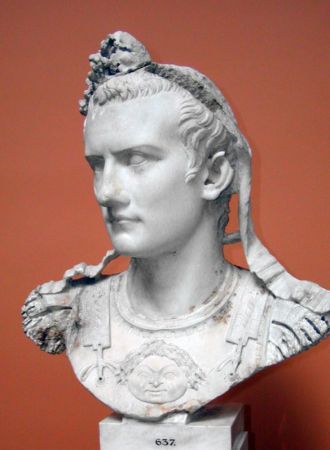